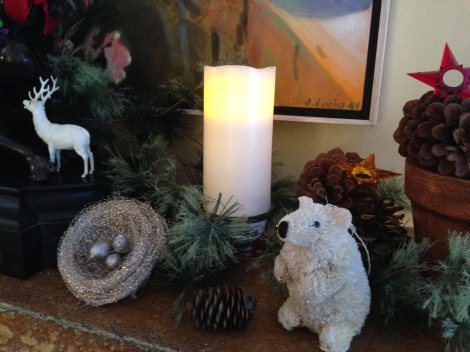 I was writing a short note in a Christmas card I was sending to an elderly aunt who is not computer-literate and had to look up the word “reveillon” to ensure I had spelt it correctly. Doing this brought me to some articles on this topic and reading them brought back a flood of memories about my French Canadian Christmas traditions.

In French, “reveiller” means to wake up. In times gone by, the Catholic Church expected its members to be at church as the clock struck midnight on Christmas Day. My tiny home town in Saskatchewan had a huge church, capable of sitting a thousand people and on Christmas Eve, it was full. My mother sang in the choir, and because the choir sat above and behind the congregation, one year I was allowed to sit with the choir. It was a magical experience, sitting there and hearing my mom sing. Today, I keep up the tradition by also singing in a choir on Christmas Eve.

Once mass was done, it was time to return home and wake up my brothers and sister. Yes, at 1:30 in the morning. Sleepy-headed though we were, we were also excited because Santa had been at our house. We were allowed to open one gift then we got dressed and went to my maternal grandparents place for tourtiere (meat pie) and other goodies. Of course Santa had been there as well – but how would he know we would be there?? A mystery that was never solved…

Some years, we were bundled up again and went to visit my Dad’s brother and his family. By then, our stomachs were full and we were sleepy. One memory that my siblings share and remember fondly was snuggling up on a bed full of fur coats – when women still wore full length fur coats. It was heaven…sigh.

Later on, we headed home. It was usually around 4 or 5 AM by then. We all went to bed, sleeping late into the morning, except my Mom who had to wake up early to put the large turkey in the oven to ensure it would be well cooked by dinner time.

This tradition played out for years and these memories are some of the most special in my childhood. What are some of your special memories around Christmas?

6 responses to “Memories of a French Canadian Christmas”