This is the more or less completed exterior of the house that was shown in my last blog entry. Now it’s time to see the interior. Keep in mind that the photos shown here are of a project that is not yet completed, therefor not staged. In any case, I love being able to see the bones of a house without all that distracting clutter. 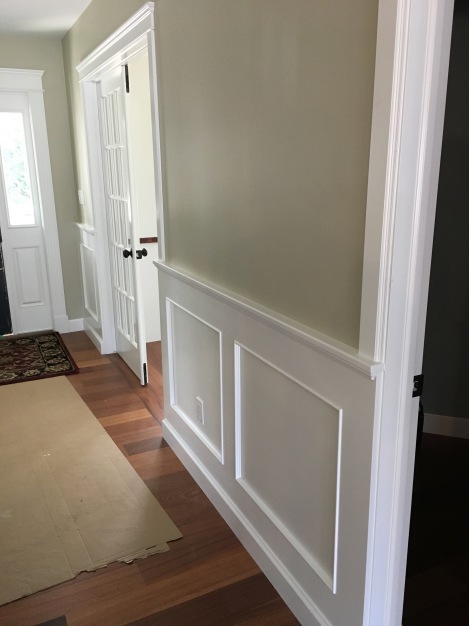 Wainscot panelling was designed to be installed in the entry way and down the hall, as would have been see in a Colonial Revival home of the 1920’s . (This was my “set date” by which I made the design decisions throughout the house.)

This staircase is off the kitchen therefor is smaller in size than the one in the entrance hall. The style of bannister, easily available at hardware stores, is historically appropriate and is actually called “Colonial Style” in big box stores. The circular “newel post,” also known as a volute, is pure Colonial style.

Interestingly enough, “Colonial Revival”, in all its permutations since its introduction in the 17th century, continues to this day to be the most popular historical style ever. 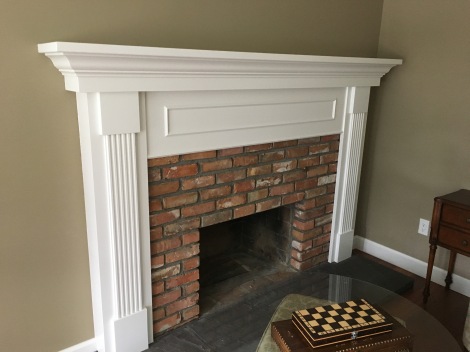 This the completed fireplace with its new surround. (see previous blog for the “before” picture). I designed another fireplace in the family room but forgot to take photos! 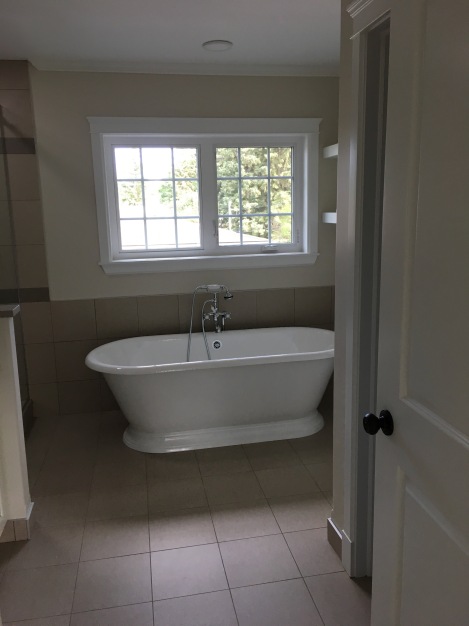 The tub style shown above is closer to 1920’s styling than a clawfoot tub would have been and the scale of the tub works well with  the size of the room. 1920’s tiles would have been more mosaic-like but this tile came in several sizes to accommodate the various requirements of a bathroom. Sometimes you need to do what you need to do – you know what I mean.

This is a wonderful, sunny spot on the second floor. This type of landing would have been expected in a Colonial Revival house of the 1920’s. I’m not sure how much function it ever had but it’s a nice introduction to the second floor. 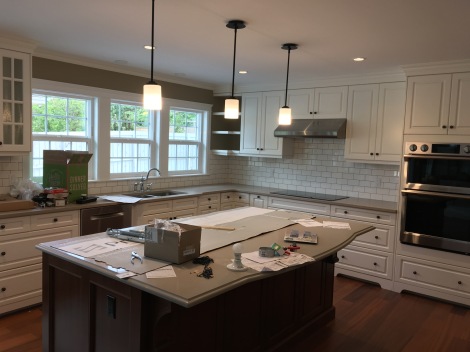 The kitchen is a blend of old and new. The cupboards have a profile as might have been seen on doors in the 1920’s however kitchens, as we know them today with cabinets, counters and upper cabinetry were very uncommon until at least the end of the decade.

The subway tiles with grey grout add vintage charm and the unadorned windows create an ambiance that has one foot in the past and another in the present. The large island is of fine furniture quality and all the counters are quartz with a subtle color and pattern. Granite, with its flashy patterns and colors, would not have been appropriate.

There are several other rooms for which I have not included pictures here – maybe I’ll add those in at a later date when the project is complete. Hope you enjoyed the sneak peek into this house!