Embarrassing, but it happened – I bought the vase you see above and listened to the dealer wax on about this well known Canadian female potter that created it. He reckoned that the vase was created in the 1950’s because it didn’t look like her early 20th century pieces – and there was the signature “Egan” at the bottom.

I did a bit of research and to be kind to myself, no information came out about any other potter by the last name at the time of my research. There were lots of Egans online!

Imagine my surprise when I recently received an email from someone called Marc Egan. He is not related to Alice Mary Egan but he is a potter. I responded by asking him for more information about his work. In his own words:

“I am an instructor at Sheridan College in the Craft and Design program (ceramics) and also teach at the Gardiner Museum (ceramics museum in Toronto) . I still maintain a studio in Toronto however I’m no longer producing at the rate I once was. I  stopped making pottery such as vases, bowls, etc  in favour of wall mounted plates and sculptural pieces.” His website is www.marcegan.com.

I bought the vase because I was immediately attracted to his sense of design which is beautiful but I should have explored a little deeper –  a good lesson for me for the future.  The good news is that his work is still available, albeit in Ontario. 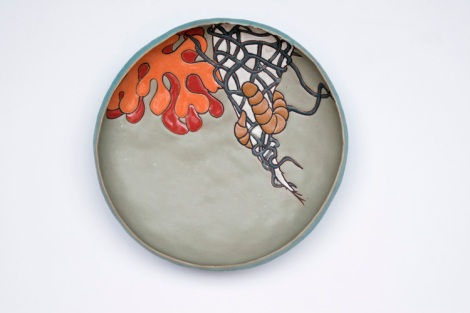 I’m also happy that he took the time to set me straight! Thanks Marc!

4 responses to “Due Diligence worth Du-ing”