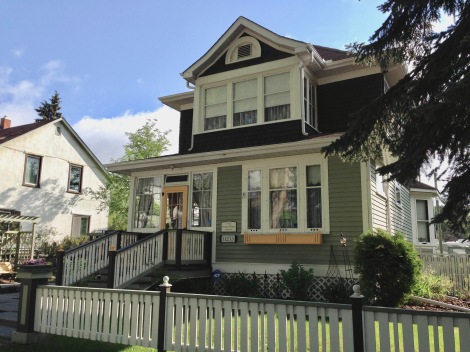 The Bell Residence, as it is known in historic circles, is for sale. The 1912 house, located in the Highlands community (voted one of the top five communities to live in Edmonton in 2018) was built by George Gibson. He was the first recorded owner and resident of the home. George was both a carpenter for Nesbitt and Miller and was employed by Magrath and Holgate as a teamster in 1915. 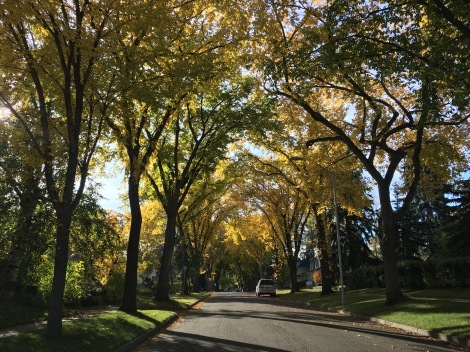 This home was part of the original planned community by developers Magrath and Holgate who started this community east of downtown Edmonton back in 1912. This photo shows the stately elm trees that line the boulevards of 63rd street. There are several other lovely, well maintained heritage homes on this street. 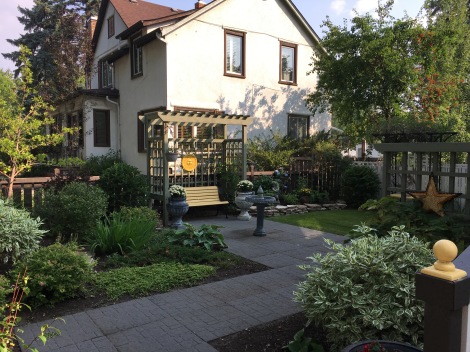 This photo is a bit dark but it does show the side yard. The house is located on a double lot – 66 feet in width. This allows plenty of space between houses – perfect for seating areas and gardens.

The back yard is beautifully landscaped with tons of perennials and bushes in a “park-like” setting. There are two apple trees that provide plenty of fruit for apple pies and anything else you can make with apples.

This “potting shed” started life as a gazebo but it was converted to something a bit more useful. We put on the roof on the gazebo and now the space is perfect to pot plants or simply store all those garden related items over winter.

Here’s a view of the inside of the potting shed. Next to the shed is a gate to the vegetable garden. Because it’s in a sunny place with lots of protection, vegetables grow very well here.

Here’s a picture of the front yard next to the seating area. 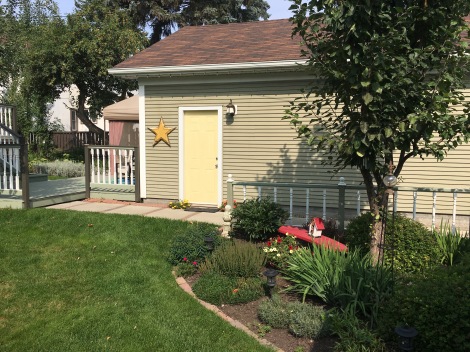 Here’s the garage – built in 2007. It’s extra wide and the ceilings are 9 feet in height which makes it great for storage. There was an old shed built in the 1920’s in this location when we moved in. Because the garage was new, it had to be built further away from the fence than before to meet code requirements. This has created another storage area on the side of the garage that’s 6 feet wide and as long as the garage. We built a gate to hide the storage so everything looks tidy. 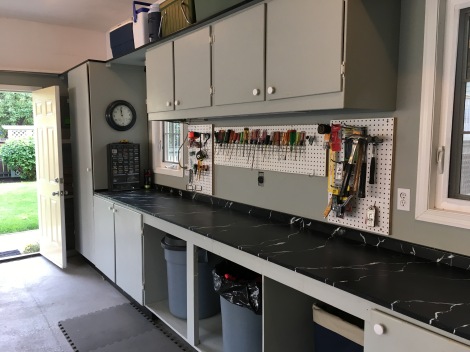 I love puttering around and building things so this space has worked very well. Custom – made cupboards hide tools and other clutter. 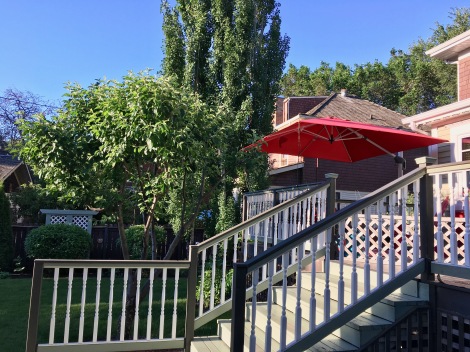 The two – level decks (one is a wrap-around) are perfect for entertaining. There is also a “door” in the lattice that surrounds the deck. This allows for lots of storage for things such as tires, furniture etc.

The bottom deck is large. It allows enough room to have a seating area plus a screened room. Originally, the idea was to build a permanent screened room and attach it to the garage. The 10′ solid wood strip that wraps around the garage was added to make this possible. 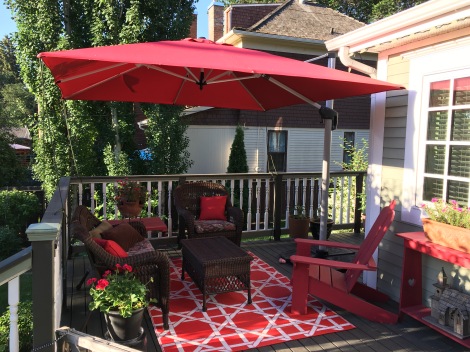 The upper deck is cozy. Lots of room for a large BBQ too!

Now let’s go into the house. But before we do that, let me give you a bit of history on the house and why it’s called the Bell Residence. This is an excerpt from the Highlands Walking Tour Booklet.

Lawrence (Lorne) H. Bell, his wife Jenny and sons moved from Montreal to Edmonton where he worked for the railway. A gifted machinist by trade, he and a partner started a business known as “Edmonton Auto Parts”. It was a successful endeavour.

In 1921 Lorne and Jenny and their two sons moved into this four square house. In 1937 he and his eldest son Alexander were killed in a car accident on the way back from an industry conference in Chicago. Jenny continued to live in the home with her son James Douglas after her husband’s death. James met and married Eunice and she moved into the home where they in turn raised their own family. The Bells sold the house in 2000. James Bell died in 2010 at the age of 91. The Bell family lived in the house for almost 80 years!

Also from the booklet: The house is a good example of the many four square homes that dot Edmonton’s early housing stock. It has a pyramidal roof and flared gable-roofed dormer which is clad in wood siding and shingles. The original front porch was enclosed in the late 1920’s – a common occurrence during this period. The interior features many original details. Plaster medallions, burlap-inset panels capped by double plate rails in the dining room, original French doors and windows. The Bell residence was added to the City of Edmonton’s inventory of historic resources in 2009.

The interior of the house consists of many original details throughout – many more than most houses of this vintage. Let’s look at some photos: 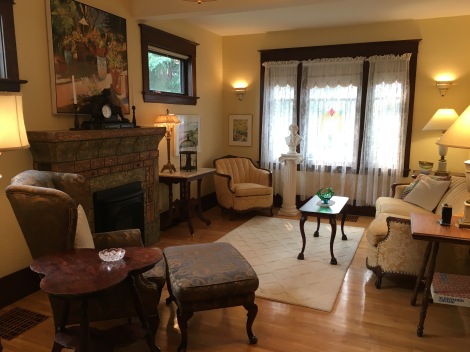 The living room is sizeable because in 1927 the Bells enclosed the front porch and added on to the living room. It was a wise move because the room can comfortably accommodate a group of people. The concrete fireplace is from that era but the fireplace insert is a high end Valor gas fireplace installed in 2016. There are antique light fixtures throughout, and some rooms have rare plaster medallions on he ceilings. The original floors are made of maple, and the fir millwork throughout the home (except for the kitchen, one bedroom and bathroom) has never even been painted. It still sports its original finish!

This is a photo of the living room from the dining room.

The dining room has its original millwork and burlap panels as was the style in Arts and Crafts homes. There is a bay window with new wood windows by Pella. They open like casement windows but look perfectly original from both inside and outside. These were installed in 2017.

The kitchen was built in 2011 as part of an addition. It features tons of cupboards and a walk in pantry, high end appliances, Corian countertops and Marmoleum floors. No granite counters for this house – the room was designed specifically to blend with the original features of the rest of the house. 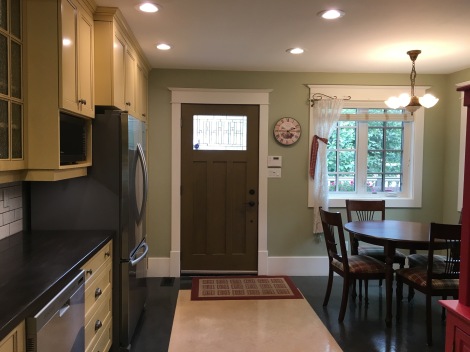 There’s enough room to seat four people comfortable. The custom made cabinetry cupboards includes a coat / boot cupboard since the door opens directly to the outside.

Now let’s go upstairs. The fir floors are original as is the landing which is made of maple.

The bathroom was restored / renovated by the previous owners who lived in the house for 4 years after the Bells, however the floors were inappropriate so we changed them to this classic style. The room isn’t large but it does contain the original clawfoot tub (behind the door). The wainscot is made of painted beadboard and the upper frieze is covered with paintable Anaglypta wall paper.

Now let’s look at the 4 bedrooms:

Here’s the Master Bedroom. I have a thing for this type of treatment – canopies of fabric above the bed.

Bedroom #2: I always wanted an old-fashioned bedroom that felt like it belonged in a farmhouse. This is the only room that has wallpaper. All the bedrooms have solid oak flooring which was installed by the previous owners. It would have been more typical to have fir floors on upper-level bedrooms but they didn’t always last that well because they were soft. I’m glad they were replaced because oak is hard-wearing and beautiful. 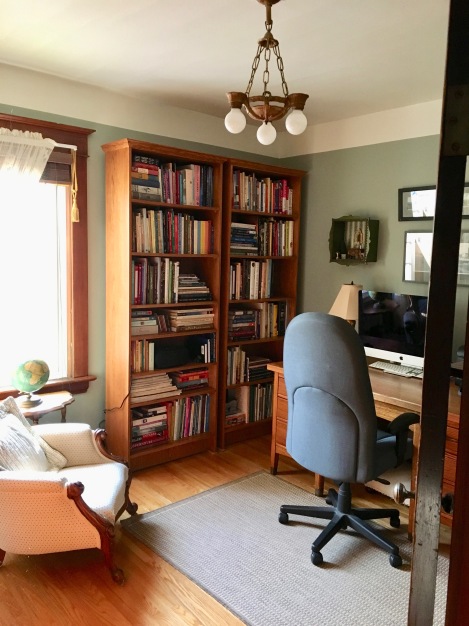 This bedroom #3 is an office, where I am sitting as I write this. I love the way the sun streams through the window early in the morning from the east. New windows in this room as well as the previous bedroom. Antique light fixtures suit the room too.

Bedroom #4 is the smallest bedroom. It would make a good second office or a TV room as I have it here. What’s special about this room is that it leads to a lovely second floor 3 season porch. 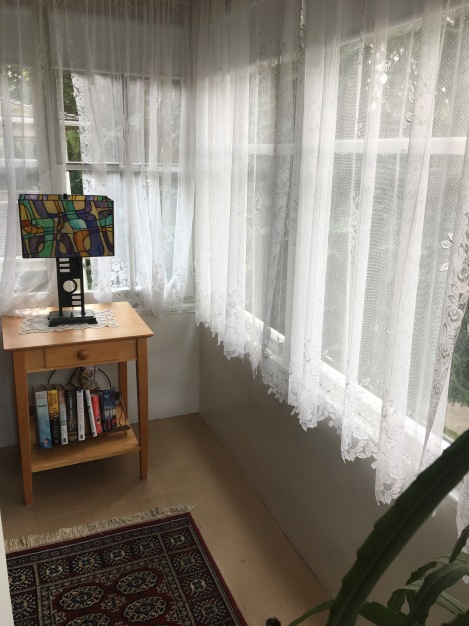 I spent many hours in this room sitting in a comfy chair reading a book and looking out over the lovely treed street below.

Now let’s hop and skip to the basement. It isn’t large but it’s functional for watching tv and doing crafts. It’s a far cry from its original however as we got rid of the gravity furnace, changed all the venting from gravity to a forced air system, and built a laundry / bathroom. All the plumbing is new as is the wiring.

This home has been the subject of many tours, articles in magazines and books and special events.

Restoring this home has been a labour of love for us but it’s time to consider the next stage of our life and downsize. We really want this home to sell to someone who appreciates a heritage home and wants to preserve it into the future.

8 responses to “1912 Heritage Home for Sale in the Highlands, Edmonton”