This is a street that is across from the Citadelle. (You can see the walls of the fortress)The Citadelle of Québec is the largest British fortress in North America. It is an integral part of the Québec fortifications and is located on Cape Diamond, the city’s highest point. The Citadelle was recognized as a National Historic Site of Canada in 1980 and is part of the Historic District of Old Québec, which was placed on UNESCO’s World Heritage List in 1985.

Have you ever been to Quebec City? Did you know that it’s one of only two surviving walled cities in North America?  (The other is in Campeche, Mexico). Quebec City is totally unique – and it’s in Canada.

I love the salt-box style of stone houses you see everywhere. This street is in Bas Quebec, or Lower Town. These buildings are protected by law, and, although the owners can do what they like with the interiors, the exteriors are strictly protected. Even newer buildings are expected to conform with the existing styles. No modernism here!

At the end of August my travelling partner and little sister, Gisele, and I visited the city. It wasn’t our first trip to La Belle Province but each time I have gone I am reminded of how proud I am that this province is in our country. Many people compare it to European cities and I would agree. After all, it’s where Canada started as a French colony only to be lost to the British at the Plains of Abraham in 1759. (The war actually lasted 7 years but the final battle was the deciding battle with General Wolfe and the Marquis de Montcalm both dying in battle).

Off the main road, Rue St Louis a.k.a. as La Grande Allee, are streets of grand 19th century homes as you see here. Most are in excellent condition since they appear to be primarily occupied by businesses. For example, Sotheby’s is in this area.

You can’t help but be totally immersed in history when you visit Old Quebec – it’s all around you in the architecture, the cuisine, the museums and the churches. The influences of both France and England is obvious everywhere.

Horses abound here as you can see in this picture. There’s no use being impatient if you’re driving and get caught behind one of these. There are horse “stops” where the animals rest, eat and drink. In spite of this the streets are very clean.

This is part 1 of 3 blog entries, mini scrapbooks if you will, of our trip. I took over 400 photos which is easy to do as the city and its environs are very photogenic but the pictures I feature here are those elements that piqued my interest. 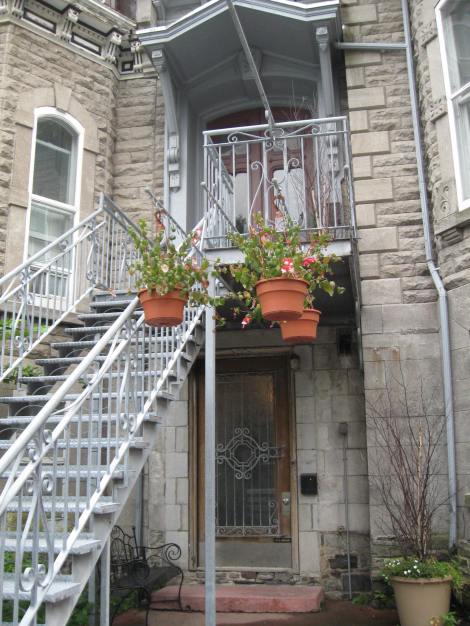 19th century houses have apartments above and at street level as shown here. In some cases there appears to be a business on the upper floor with an apartment below.The doorways are very attractive although the doors above street level tend to be a bit more ornate.

I regret not having taken pictures of the amazingly delicious traditional foods we had but on the second day of our trip I dropped my Iphone in the water! I had to resort to using my old-school camera.

This is a portion of the wall that surrounds Quebec City. The wall surrounding Quebec City is 4.6 kms. in length.The fortifications were headed for ruin after the British military pulled out in 1871. But Lord Dufferin, the Governor General of Canada from 1872 to 1878, loved Old Quebec, and established La Citadelle as a second residence. He persuaded local politicians to save the old French walls from destruction.

The predominantly Catholic Churches that proliferate throughout the city and the province are a significant part of its history. In the past, when the country was still young, different denominations actually shared a common church simply because there weren’t enough people to support separate buildings. They simply scheduled their services differently! 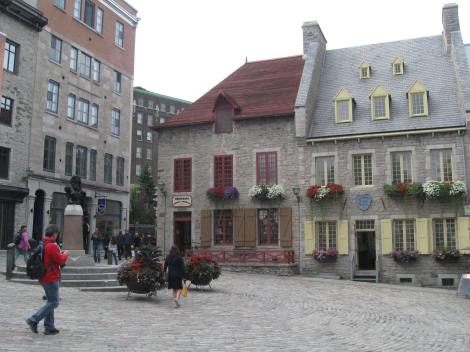 My last picture in this blog. This is Place Jacques Cartier – it’s a small open area with buildings on three sides and the church, Notre Dame des Victoires, on the fourth. It’s where it all began – the history of the French in this city. Note the cobblestone streets – just like Europe. High heels not recommended.