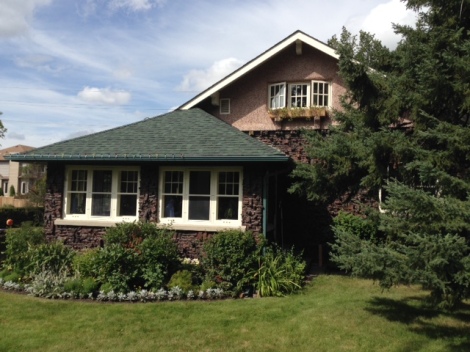 A charming English style Arts and Crafts cottage in Edmonton

Who would have thought that a product that had been discarded because it was discoloured and distorted could be such a thing of beauty?  Old house enthusiasts will know that I am talking about the humble clinker brick.

According to a company called Gavin Bricks in the USA, “the name “clinker” comes from the sound they make when banged together, being heavier than regular bricks.”

The clinker brick was the darling of Arts and Crafts architects who attempted to rebel against the uniform products made by machines. They designed their buildings with natural materials that provided character and looked handmade and were fiercely opposed to the assembly-line building so prevalent during the Industrial Revolution. 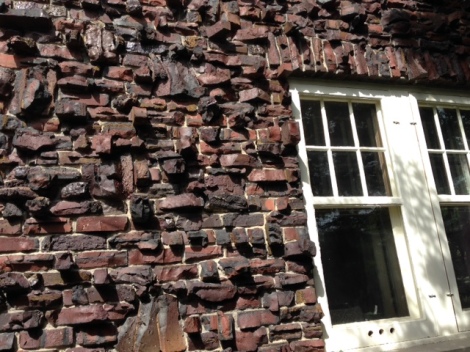 Exterior wall made of clinker bricks on this Arts and Crafts cottage.

There are several such Arts and Crafts cottages in Edmonton where clinker bricks have been used in the interior on fireplaces as well as on the exterior. This home is located in Northwest Edmonton in the midst of a community of much younger homes. It sits on the edge of a beautiful garden that spans a triple lot. The owner is a horticulturalist and she has created an oasis of charm right in the middle of a bustling metropolis. 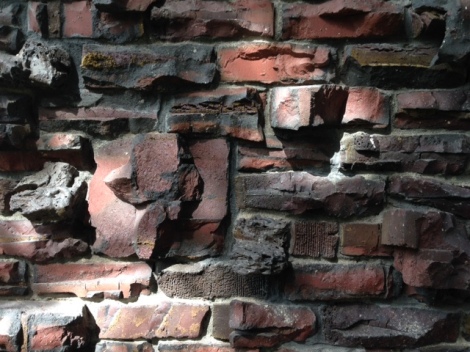 I presume that, at one time, Clinker bricks were graded according to their degree of distortion because I have seen many buildings with clinker brick that did not have this level of texture and variation of colour. You can see the red colour in the center of some of the bricks and their burnt edges – sort of like burning a cookie before the center is cooked!

Note the dentil moulding just below the stucco wall.

What I find especially interesting in this home is the builder’s attempt to create dentil moulding with the bricks as shown at the upper edge of the wall, just below the small windows. The term dentil, used in classical architecture, refers to a number of small rectangular blocks used to create a pattern. It is most often seen in interiors but in homes of the past it was used on soffits. (a soffit is the underside of an overhanging arch or eave) Here the builder created a dentil border using groups of three blocks – but those blocks are anything but rectangular!

I like to think that we appreciate the uniqueness of such homes in the same way that the proponents of the Arts and Crafts movement did. After all, think of the miles and miles of vinyl clad homes in “architecturally controlled” neighbourhoods in your city and you will understand exactly what they were rebelling against.