Note the back wall and baseboards.

For some strange reason I’d always assumed that the fireplace in our 1912 house had been made with concrete – and it was but I had no idea it was actually a hollow shell.

In 1927 the owners, (at that time, the Bells), decided that a larger living room in the 1912 home would be more functional than a porch that was only used in the summer. They extended the exterior walls to enclose half of the porch. I’m glad they did because the living room would have been quite small otherwise. They removed a corner fireplace and had this one built.

We began to realize that the fireplace was much lighter than expected when we saw that there were no special supports in the basement – yet the floors on the main floor weren’t sagging from the weight. And so it was that the removal of the asbestos pipe finally revealed how the fireplace was constructed. 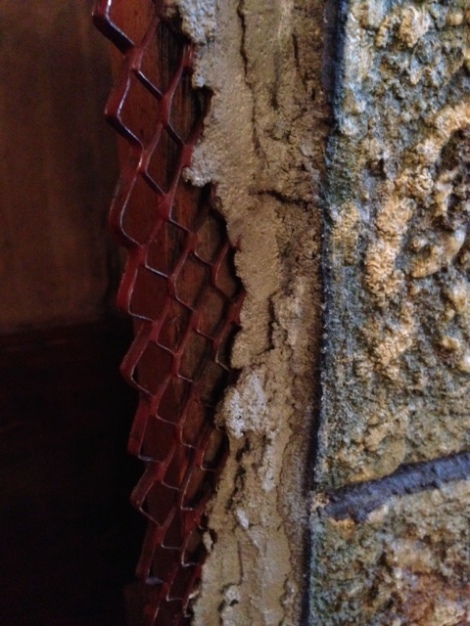 Note the mesh and three layers of concrete.

A frame had been created using wooden 2 x 2’s and these were erected over the baseboards. As it is now, we could remove the fireplace and have the wall back – with baseboards intact!

A heavy wire mesh was attached to the frame and a first coat of wet concrete was pushed through the mesh to grip it – much like plaster acts as ‘keys’ on wood lath. A second coat was placed over the first coat to smooth it. The third coat is where the artistry began. Rough ‘bricks’ were outlined in the plaster creating the pattern we see today and once dry the bricks were painted with decorative green and terra cotta glazes.

The decorative metal knob is threaded onto a bolt that holds the fireplace secure to the walls. I haven’t come across another fireplace like it thus far but I would certainly love to hear from someone who has a similar construction.

Check the next article to see how it looks with the new insert!