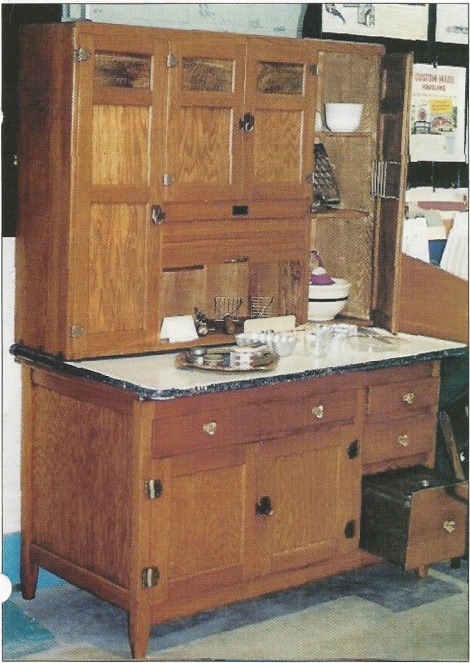 It’s hard to imagine kitchens without rows of cupboards, central islands, stone counter tops and task lighting. Yet the configuration of the kitchen that we know and love today has its roots only as far back as the 1920’s – scarcely 90 years ago. Before that, the kitchen was a largish room with a cast iron stove, or fireplace, and a large central island that was actually a big, sturdy table on which all the prep was done. Think of Downton Abbey’s kitchen in the earlier episodes and you get the picture.

The only true kitchen cabinet was the free-standing multi-purpose unit you see in these photographs. It is considered a transitional piece of furniture that bridged the gap between Victorian-era kitchens and those of the “modern” 1920’s.

It was truly revolutionary for its time – the turn of the twentieth century. Having said that, these cupboards were still being manufactured into the 1930’s. One of the best known companies of this type of cabinet was the Hoosier Manufacturing Company in New Castle, Indiana. So prevalent were their products in homes that the cabinet became known as a “hoosier” and is still known by that name in antique-collecting circles.

There are different versions of this cupboard-cabinet and the prices vary accordingly. The more bells and whistles, as shown in the second picture, the more you can expect to pay.

Today collectors like cabinets that include some of the following: metal-lined bread drawers, original flour or sugar drawers, flour or sugar sifters, metal holders for spices and flavourings, small shelves and accessories like clocks, thermometers, and grocery list reminders. Tambour doors, like those you would see on a roll-top desk, are also desirable.

Condition is important. The porcelain top should move in and out easily without binding.The same goes for the tambour door. The finish should be original, if possible. The hardware should be in good shape and the doors should close easily. The metal drawers should not be dented. Finally, the innards should be present. Expect to be charged considerably less for a cabinet that is devoid of any extras.

Cabinets of this type in our market fetch prices anywhere from $1200 to $1600 depending on size and the number of extras.