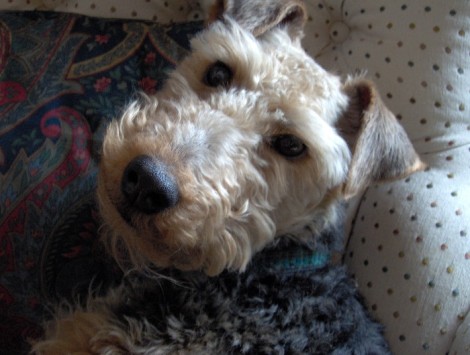 Yup, this me. Pretty aren’t I?

Here I am again. I’ve received some nice emails from other dogs – at least that’s what they said they were. I have a sneaky suspicion that a fur-less parent was writing for them. It’s not just any dog that has the manual dexterity (yes I know I have paws) to hit those computer keyboards like I do. My fur-less mom has a Mac computer and the keyboard looks more like a toy… hey that gives me an idea…

I love toys almost as much as I do eating. Sometimes I try to do both at the same time – eat a toy! I haven’t done this for a while because I’m so much more savvy now but there was a time when I thought it would be uber-cool to eat nylons. No, silly – not the kind that has two legs, just the knee – high kind. I like the way they filled up my mouth even though I don’t remember them being particularly tasty. I ended up at the vet’s and spent the night in a kennel. Let me tell you –  their accommodations are way over – rated.

The second time I tried to eat a nylon, my fur-less Mom saw what I had done and reached into my throat and out it came – all slimy and yukky. I didn’t like the feeling so decided maybe eating nylons wasn’t such a good idea. To any dogs out there – beware! Been there – done that.

The next time I decided to eat something different – a piece of plastic toy. No, not a complete toy, just a little piece of toy that someone tossed on the ground. The problem was that it lodged in my stomach and wouldn’t come out. I also got an infection and spent a week at an emergency veterinarian clinic. I had to be operated on. Nobody brought me flowers but boy, there sure were a lot of tears when people came to visit. The nice ladies at the vet’s would lay me out on a trolley and bring me out to a visitor’s room because I was too weak to do anything but lay there.

I have to admit it – even if they had brought me a nice treat I couldn’t have eaten it. I almost died. Then I started to feel much better. I continued to lie on the trolley however, and gazed at my fur-less parents in my best “poor me” look. Boy, did I ever get attention! I kinda liked it… all that patting and cooing. I could get used to this!! But the jig was up one day when they brought me a treat and I just couldn’t say no. Busted! They knew that the last couple of days had been an act. My stomach was getting me into trouble again!

Those days are behind me. Now I get human food because of my cancer. It’s a lot tastier than dry dog food and the menu changes daily. If I don’t like something I just sit by my dish and give them my best “Is this all there is? look. If I wait long enough, a new menu item comes my way. I have them well-trained.

Until next time. Don’t forget to hug your pet today!

Taffy
PS: Did you know that the second week in December is International Santa Paws Week?
PSS: Are there any other dogs, or even…cats… who would like to write to me out there?

3 responses to “Taffy Talks – about Nylons and Toys”