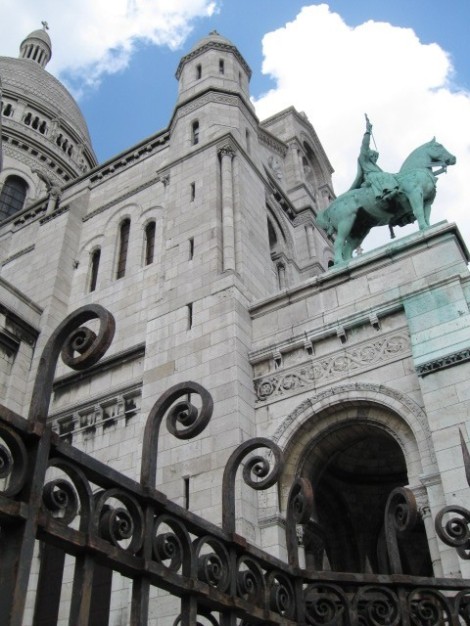 The Basilica of Sacre Coeur Church in Paris. It is a constant reminder of not only the clergy killed in 1870 but to all martyrs of the Commune.

I have been busy recently finding out what I can about 19th century France. I think that doing research is probably the best part of writing a book because you learn so many new things – and some are absolutely wild. I just had to share this.

The 19th century was a crazy ride for anyone who lived in Paris. If you watch History Channel you know that the City of Light, as it has been known for some time, was anything but a pleasant place to live – unless you were rich. Even if you were rich, however,  your political leanings could get you beheaded (the guillotine was used until 1940!)

During the great siege of Paris – from mid September 1870 and the end of January, 1871, the city was completely blocked off from the outside world by the Prussians. Communication outside the walls continued thanks to hot air balloons, photography and even carrier pigeons! The biggest problem, however, was lack of food. In spite of the initial stocking up of sheep, pigs and other animals, the city was starving.

A View of Paris from the top of the Sacre Coeur today.

Nothing was safe from the hungry hordes – dogs, cats, rats, even carrier pigeons. Finally the zoo could no longer afford to feed its animals so they offered them to the public for sale as livestock. Bidding was fast and furious as the wealthy bought the deer, antelope and other less exotic animals. So what happened to the more exotic animals you might ask ?

A famous restaurant called Voisin has gone down in culinary history for its Christmas Day menu. It was the 99th day of the siege and this special meal was available only to those with deep pockets.Curious about what they ate on that day?

Here is the menu , translated into English, as written in the book Chronicles of Old Paris by John Baxter:

Puree of Red Beans with Croutons, Consomee of Elephant

I guess when you are hungry, anything tastes good and it probably did considering this restaurant had some of the most famous chefs working for them.  Alexandre Etienne- Choron was the creator of this menu.

The restaurant did not let its standards down even if the city was under siege. I especially like the story about a woman who wanted nothing but a salad. The waiter haughtily answered her “Madame, this is a restaurant, not a meadow!”

2 responses to “When Elephants were on the Menu in Paris”