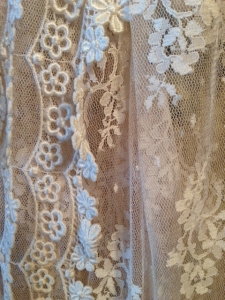 Detail of machine made lace on a 1930 flapper dress

Since the Middle Ages, when fishermen began to generate extra income during inclement weather by creating basic laces, laces have continued to awe and inspire.

Today, lace has a romantic reputation. It is associated with sentimental feelings surrounding events such as christenings and marriages.

Used as a part of interior décor, lace instantly lends grace and imparts a feeling of the past.

Almost since the very beginning however, owning lace has been the privilege of the wealthy. Royalty and noblemen wore lace to flaunt their wealth, and the obsessive need to acquire lace led to financial ruin for many.

Although women trimmed bonnets and bedding with lace, at its heyday, it was worn mostly by men. Parading around in lace was considered the ultimate in conspicuous consumption. In the sixteenth century, Henry the Third was said to have worn over four thousand yards of pure gold lace on his person!

Many laws were passed attempting to curtail this “excessive luxury of veils”, but none worked.

But where did this money go? Certainly not to the lace makers. Families who had too many mouths to feed (read daughters) send them to convents who were associated with a lace manufactory. In exchange for room and board, children as young as eight years of age learned a trade that would see them working twelve hours per day, increasing to eighteen hours per day as they grew into adulthood.

Because lace took so long to make, there was a risk that it would get dirty therefore fires were not allowed at all. In the winter, these lace makers worked in sheds near animals in an attempt to keep warm.

Thousands of young women were blind before the age of thirty—and all to satisfy a fashion whim! To make matters worse, lace makers were prohibited by law from wearing the very lace they were making!

In spite of lace’s sordid history, the results are testament to the incredible skill and beauty of the craft. In the 1889 Paris Exhibition, one item was said to have taken 65,000 working days to complete! This caliber of lace is very rare, and again its ownership is the privilege of the wealthy collector, or the museum. However, Victorian and Edwardian machine made and handmade lace is still available and within the reach of the more modest collector. The invention of lace making machines during the Industrial Revolution created a resurgence of interest in the craft, and gentlewomen rediscovered the pleasures of needlework. 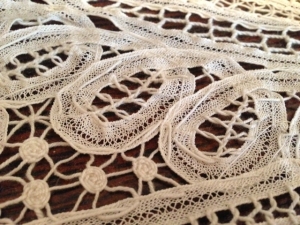 Lace made in China is often still made by hand

1. Read, read, read. Get books from the library or buy your own for instant information.

2. Learn how to identify machine made lace from hand made lace.

3. Check the workmanship of the piece. Learn how to take wash and care for your pieces.

4. Check the condition. Some stains and tiny tears may be acceptable due to age.

5. Enjoy your laces —let them breathe, and if you must store them, learn how to do it properly.