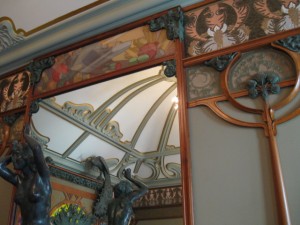 A couple of weeks ago our local newspaper carried an article about a 1912 house that had been “restored”. It featured several pictures of this home under the caption “House Beautiful”. I am always happy when a heritage home gets ink in a newspaper or magazine but most of the time, unfortunately, the articles talk about how much better the house is since it has become modernized.

People who know me know that I am not a strong purist – it’s almost impossible to be in our city as there are no stock of old houses to even recycle original materials! Most of us old home owners have modernized some aspects of our home in order to be comfortable and extend the useful life of our houses.

So we do what we can… However there is modernization that takes into strong consideration the original “fabric” of the building. This includes the mill work, the layout of a house, the original windows, hardwood floors and all those details that make up the character of an old house.

Then there is modernization that strips an old house, making it temporarily functional, but shredding the entire character of the house in an attempt to make it modern. These same homeowners pat themselves on the back for “saving” a bit of base board or a door or two, all the while they rip the guts out of the place.

This was such an example.

All the walls had been removed. Nothing was left of the original structure of the home – on the inside. The staircase had been moved and all the banisters, railing, hardwood steps had been mothballed and replaced with a plexi-glass rail and plain wood steps. No plaster walls remained – just flat drywall. Windows had been replaced. Floors were replaced. And so on…

The entire interior was a good example of modern design, but it had no connection to the exterior of the house which was, ironically, untouched and almost original. This house just happens to be on the market at a price that I believe was upwards of $800,000. So who is the buyer for such a property? An old house lover or a person who likes modern decor? It’s a “House of Disconnect”.

It’s no wonder that people are confused when they start working on an old house and see such examples promoted as desirable modifications!