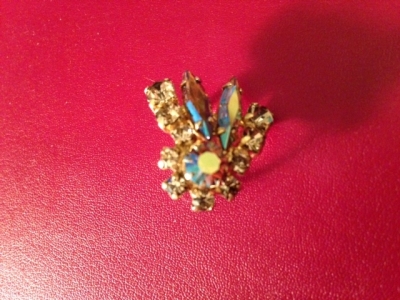 One of the questions I always ask when I go do a general estate appraisal is whether the client might want me to look at any jewelry. Quite often the answer is, “I doubt there’s any value – after all, it’s only costume jewelry”. Many people believe that because a piece of jewelry is not made of precious metals or have expensive stones that it isn’t worth anything.

Nothing could be further from the truth.

I think I must have been a crow in a previous life because i love shiny, sparkly things. .. and nothing has more sparkle than Sherman jewelry! Sherman jewelry is Canadian-made and its quality is unsurpassed in costume jewelry.

The Sherman Costume Jewelry Company (Also Sherman Jewellery) was founded by Gustave Sherman in 1947. His parents were Jews who immigrated to Canada to escape persecution in Eastern Europe. Once in Montreal, young Gustave took a job as a jewelry salesman, which sparked his interest in the trade and eventually led to owning his own business.

This is what an article written on “Collector Weekly“‘s web site had to say: “By the 1950s, Sherman had established himself as Canada’s foremost costume jeweler, and his work was starting to appear on runways in Paris and New York. Sherman, whose slogan was “made to last a lifetime,” demanded the highest level of quality in workmanship and material. Using Swarovski crystals, special ordered to his exacting specifications, Sherman often copied examples of fine jewelry. He was willing to pay for the best materials, so his pieces always featured Swarovski’s top-of-the-line stones, often with shimmering aurora borealis coating, which he then put in sturdy japanned, rhodium-, and gold-plated prong settings…”

How can you tell if you have true Sherman jewelry?

It’s really simple because each piece of jewelry is signed “Sherman”. There’s some controversy about whether every single piece was signed – especially when it comes to sets. I myself have seen sets that you would swear are an exact match yet not all the pieces are signed. According to an interview with a descendant of the Sherman family, it was stated adamantly that every single piece that ever came out of the company was marked. We also have to remember that the copyright laws were not as stringent then as they are today and that some unscrupulous companies freely stole designs from other, more successful, companies.

The Aurora Borealis shown above is the most common therefore has less value. Having said that, marked Sherman Aurora Borealis is still worth two to three times what an unmarked piece is worth. The more desirable colors are the deep rich colors like red, blue, purple and green.

So, now go check out that jewelry box!