TIP: If you’re thinking of buying an old house make sure you get the inspector to find out what the water and sewer lines are made of and when they were last serviced! 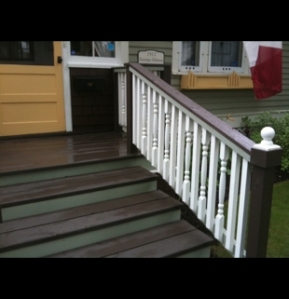 Earlier this summer my husband and I agreed that the reworking of the front yard was going to be our last major project on the house. This was for a couple of reasons…

First, after five + years of major renovations/restorations on our 1912 house we are just plain tired. I really don’t want to see the end of a hammer unless it’s to build something small. (Painting, however, is another story).

Secondly, there’s no more cash for major renos. At some point you just have to know when to call it quits. A person could continue making “improvements” until the proverbial cows come home, but at some point what you are doing has absolutely no effect on what you can get for a house once you sell it.

As any old-house owner knows, the list of things to do can be very, very, long.

So in spite of this promise to ourselves, we are already facing a major repair that was unplanned – surprise, surprise.

On Thanksgiving Day, while working in the back yard, we noticed water pooling next to our deck. My husband was just about to plant a bush and we noticed with horror that the hole he had dug was filling with water so quickly it was actually bubbling! We had a water main break!

We called our local water supplier and they suggested Jaguar Water and Sewage Services. The workers hooked us up to our kind neighbour’s water supply so that we could have water. They dug three deep holes of approximately six feet deep and repaired the water main.

Thank goodness that the water lines had been converted in 1991 to copper. If not, the company would not have repaired it – they would have had to replace the lead pipes. It would have cost us $8000 instead of the $5100 it actually did cost. The connectors to the two pipes had been inproperly fitted and water had eroded the coupling so that the water was flowing directly into the ground. No wonder we had such lousy water pressure! All this because of poor installation!

The company was efficient and all the workers unfailingly polite in spite of the fact that it was snowing and the yard was a mud pit! You’d never know they had been there once they completed the job except for a small section of the yard where the grass is missing.

Our sewer lines are 100 years old and are still holding on. We were told that if we maintain them by having them professionally cleaned every other year they should hold out for many more years. Let’s hope so…