The antique trivia portion of my newsletter back in June of this year was very popular so I have decided to do more of this.This is what you do: – Scroll down to the bottom of the page and look at each of the three images. See if you can figure out what they are before you read the descriptions in the remainder of this blog entry. I don’t have any information with regards to sizes of the items but you can hazard a guess anyway. These images were taken from the Victorian Book of Household Goods – a fascinating history of objects of the Victorian period through images. Do it now. Are you ready to find out what the answers are? OK here we go.  1. The first image as shown above is a Victorian fingernail brush. It is rounded rather than flat so that it scrubs under, over and across the fingernails. A good idea when you think of it – better than just the flat ones we get today!

2. The second image is a poacher’s alarm gun. According to one site on the Internet the poacher’s alarm gun was operated by one or more trip wires that released the top weight which then fell onto the firing cap to set off a blank 12 bore cartridge. You can still get antique ones on certain sites – especially sites that have anything to do with antique guns. Several of these poacher alarms would be set up on private property. They did not hurt the poacher but they would definitely have scared them – as well as warned the animal of impending danger. 3. The final item is a flower vase or epergne. I suspect that this was the easiest one to figure out as it definitely looks like a flower vase. It wasn’t enough for a Victorian manufacturer to make a container for flowers – they had to make the vase look like a flower too! 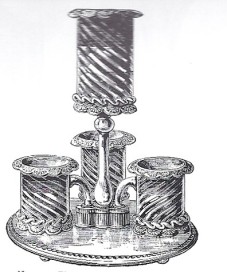 There are some absolutely beautiful versions of this type of decorative accessory. They would have had pride of place typically on a dining room table. Flowers were very expensive then – not the garden variety that proliferated during the summer season but hothouse varieties like roses and lilies. It was only suitable that the cases be expensive and showy too. Versions of glass epergnes well anywhere from $200 to $1000 depending on their condition, rarity and beauty. So how did you make out?