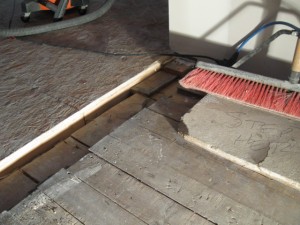 One of the most pressing issues we had to deal with in this reno has to do with the floors. Our house will be celebrating its 100th birthday in 5 months and over those 100 years sagging has taken place in the center of the house. The foundations are strong but the center supporting beam has sagged.

I have a theory about that. Although I suspect the sagging might have taken place anyways I think it was helped along by the fact that there was a heavy piano placed along that wall from 1921 until 2005. Could that have created some of the problem? Anyways, although you can’t tell by the picture at left the difference was almost two inches. So why did this matter? Well for starters it has to do with the way the addition was attached to the house. In order that the walls between the old kitchen and new addition not be open to the great outdoors for two months the contractor lined up the addition to the foundation – which of course makes sense. There really was no way to tell how that would play out when the walls were removed. Surprise! 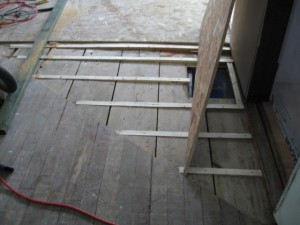 The only way that the floors on the main floor could be made even would be by removing all the hardwood, adding a new sub floor and reinstalling the hardwood. We decided that was not worth all the other issues it would create with doorways and adjacent rooms. Jerry and Dave put their heads together and came up with several possibilities but this is finally what they settled on. They cut strips of 2×4 and shaved it as you see on the left. They built up the area around the register. They then added a new sub floor and sanded the sheets of wood with a commercial sander to even them out more. They placed the sheets of underlay that was the basis of the Marmoleum we chose for the floor. It wasn’t perfect but it was the best situation under the circumstances. When After Eight Flooring Company arrived the installer added a 1/4 inch layer of leveller in the area where it still felt low. Although you can still feel a slight variation between the two areas I can live with this. Having an old house means never having to say you’re sorry that it’s not perfect. You’ll see in our final pictures how it turned out – yet to come.