In a previous post I talked  about the interesting things that old house owners often find inside their walls. But the story doesn’t end there.  Walls, if they are original, say a lot more about your house than any newspaper fragments.

Original walls tell the viewer about the type of construction that was used, and the kinds of materials that were in vogue at the time your house was built.  The way the walls are divided in your house speak volumes about the age and style of your house. That’s because the way walls were divided went in and out of fashion like everything else.

Look at the picture to the left. The walls in many Victorian houses were easily 10 to 14 feet in height. The rooms were not large but there was a lot of wall space relative to the size of the floor. The walls in parlours and entrances and often dining rooms were broken up into three parts known as the “tripartite” division. It consisted of a low dado or wainscot, a field (the center area) and the frieze which was an area above the field that was usually separated by a picture rail.

The bedrooms however tended to be plainer. Some had wainscot (at the bottom) but many did not. The room you see to your left only has a field and a very small frieze.

If you have a Victorian house never cut your room in half wih wallpaper. Make the division below the half way mark and adjust this even lower if your walls are extremely high. 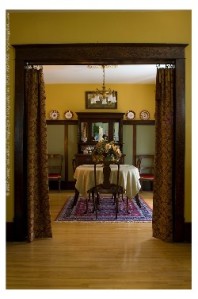 The second room you see here shows the changes that happened in the early 20th century. It is quite typical to see this division in Foursquare homes and Arts and Crafts bungalows.

In this example the dado or wainscot is much taller and the field is missing. By the way these two words (dado and wainscot) are often used interchangeably but wainscot is more of a British term and it often describes wood panelling that is placed on the lower section of the wall.

In higher end houses the dado would have been made of solid wood paneling but the treatment you see on the left was very popular. The wood here is fir but it was commonly seen in oak as well. The insets of the panels were covered with burlap or grass paper (very typical Arts and Crafts detail). A less expensive option was to use less expensive woods, paint them and use wallpaper in the insets. Some homeowners created the whole look by using different wallpaper patterns and borders. If you try this make sure you use designs that feel masculine and natural, not fussy or feminine.

Notice how the frieze (above the dado) has gotten so much wider. It could be as deep as three feet and it was also often covered with wallpaper – especially the popular William Morris patterns.

Some homes had non-structural beamed ceilings to add to that Medieval feeling that was so prevalent in the Arts and Crafts style.

But all that mill work cost money so that by the 1930’s the concept of Modernism had become entrenched in fashionable homes. The millwork disappeared. Baseboards were lower and arched doorways did not need all that mill work. Some rooms still had a frieze but the ceilings were coved – which meant that they were rounded, without crown moulding. Now there are a lot of variations because let’s face it, builders built homes to please their customers and many customers wanted what was traditional and familiar – just like they do today. That’s why certain details like beamed ceilings and certain styles of mill work show up in homes way after the style would have passed. What do your walls say about your home?