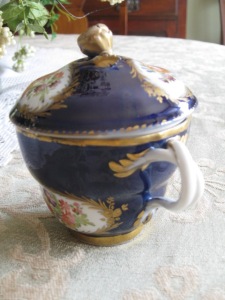 Based on the number of emails I receive on this topic I think it might be a good idea to show you how I went about finding out some information on the teacup on the left. Now let me tell you what I did know about it when I bought it at an auction:

I took my prize back to the store and began my research to try to find anything that looked like the shape of this teacup. Notice the smaller base and wider upper half of the cup. Look at the two – part handle. It’s very organic and it flows almost like it’s part of the leaves on the cup. Also note the handmade flower that doubles as a handle for the lid. These were all very different – I figured it would be easy to find something about this cup.

So I started to look for marks that would match the lines I saw at the bottom of the teacup (see the image lower). They were crossed, and written by hand in blue under glaze.

There was a dot in the center and the initials B.W. which were hard to read.

Now, have a look at the pages on the left. This is only two pages of something like 6 pages of crossed sword marks in just this one book alone. In Godden’s Guide to European Porcelain there is an entire chapter devoted to the many companies that used variations of this mark. The reason they did so was because this mark was associated with very high quality Meissen china. And everyone wanted in.

Needless to say the copywright laws were not too stringent because companies continue to use this mark even today. It’s one of the most highly faked marks there is. 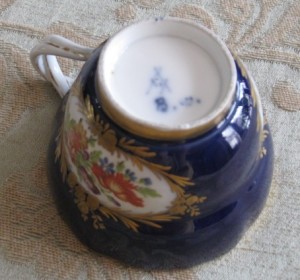 Crossed swords mark is one the most highly faked china mark there is.

Sometimes the best way to figure out what it is, is to find out what it isn’t. If you Google “Fake Meissen Marks” you can get lots of information. You would be horrified to see how many companies even today fake all sorts of marks.

At this point I was feeling a bit frustrated but at the same time I did not want to give up. I felt like a bloodhound on the trail of…. china marks!I knew it was old – that much I did know so instead of checking out marks that appeared more contemporary I decided to check out the definitive guide to English pottery and porcelain. Of course this is Godden’s.So I checked out my favorite Godden books. And finally, in that chapter I told you about earlier in the article I found a picture of a set of dishes that had exactly the same shape of handle, and most important of all, the exact flower on the lid of a sugar bowl, tea pot and a small container that is shaped like a ginger jar. The shape of that jar is exactly the shape of the tea cup I have. The colour is different of course as is the design that has been handpainted but the original shape and style has finally been identified. YES!!!As it turned out my teacup and lid was probably part of a Marcolini period Meissen tea service. Apparently the forms (or shapes) are typical of this type of service. It did indeed have crossed swords in blue underglaze but the particular set they had showed a #4 below. I have done more research since but I think I would find out more ifI chose to spend even more time looking to see who BW was.

The service, including my teacup was made in the period C1774 – 1795. That made my cup approximately 230 years old! If only it could talk!Although it was English it would have been there at the time of the French Revolution! Maybe one of the aristocrats was smuggled out of France to England drank out of this teacup! OK – I’m getting carried away.In any case now you know how long it can take to find information on obscure pieces. I probably paid too much for it anyway but I have to say this cup is really one of my favourite things!

102 responses to “How to Research a Teacup Mark”