The 1912 Bell Residence in summer

Meet my old house. It was “born” in 1912 and built by George Gibson, in the “Four square ” style that was so popular in the early part of the 1900’s. Being in western Canada, at 98 years of age it is considered fairly old (unlike those in Eastern Canada and the US!). George did not live here very long. The bottom of the real estate market fell out in about 1913 – 1914 followed by the First World War. It took a long time for housing to get back to normal and it never returned to pre – war boom levels. Many people lost their homes and their investments when they speculated on real estate at the time. (Does that sound familiar?)

Did you know that real estate values for main street commercial lots in Winnipeg, Manitoba were as high as New York City’s? I suspect most of us Canadians would find that hard to believe!

My house is known as the Bell Residence because the family that moved there in 1921 lived there until 2001 – 80 whole years! The young boy who moved there with his family died only a few days ago and it was my great pleasure to have met him and his family just this spring. He had a brother named Alexander Graham (no, not the famous one). His brother and father, Lorne, were killed in the 1930’s in an accident on their way back home from Chicago where they had attended a business conference. It was a hard blow to him, his Mother and his sister.

What impressed us the most when we bought this house 5 years ago was its authenticity. In the late 1920’s the porch had been not only enclosed, but made into an enlarged living room, something we are grateful for. In our cold climate we get much more use out of a larger living room than an open front porch. The rest of the porch was enclosed with glass windows and this gives us a place to sit for three seasons of the year. 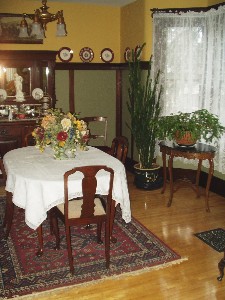 The dining room would have to be one of my favorite rooms because it is so authentic. The fir mill work, although modest, is nevertheless original . It consists of a typical wall division of a 9 inch baseboard, a 62 inch dado and a 37 inch frieze above. The dado is topped by a double plate rail which I use for displaying my mom and grandma’s china. The dado is split into panels by flat pieces of fir. The panels are inset with burlap fabric which has been painted. The fir has never been painted so it has its original patina.

You can’t see the ceiling which is plain but in the center of the room’s ceiling over the table there is an original plaster medallion which is lovely. At some point the previous owners had to repair the ceiling and did this with drywall but they were careful to keep the original medallion. The light fixture is more from the 1920’s. I found out that the family still has the original light fixture. I have asked them to sell it to me first should they ever decide to part with it.

The floors throughout the main floor are solid maple. Original fir French doors swing between the entrance and the living room. All the windows with their wavy glass are original. Original curtain hardware still sits on the window casings. Even the kitchen was original! This is where we had to draw the line. We built an interim kichen but now our next project is a total kitchen renovation.

One response to “Meet my Old House”