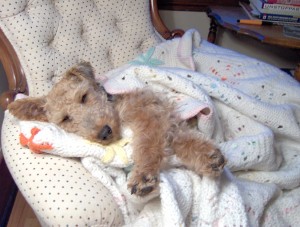 A Pet makes house a home

This is our pup – I have no reason for putting her on this blog except that I came across this picture while I was searching for old house pictures.  She is a Welsh Terrier and is ten years old. Many people think Welsh Terriers are miniature Airdales but they are a breed apart. Just yesterday a neighbour who owns an Airdale told me “Your dog looks like an Airdale that was put in the dryer too wet and shrunk”.

I forget that she isn’t a pup sometimes and expect her to act frisky all the time. She is in good health overall and appears to have  gotten over the habit on chomping down on what ever she finds that she thinks may be tasty.  At least I hope she has.

It cost us $5000 for an operation last year to have her stomach opened and a foreign object removed otherwise she would have died.

The vet found a piece of toy that had jagged edges – the sharp plastic had imbedded itself into the walls of her stomach. She’s my walking buddy and is sitting right next to me as we speak (she likes to help me compose emails).